Overnight was another wild night with thunderstorms, lightning, flooding and winds as well. There was apparently tornadoes elsewhere in the State. And for a second day in a row the I65/I70 crossover was closed due to a truck incident. This time a truck got blown over in the wind blocking the freeway. Yesterday it was a crash between 2 trucks with a fire.

Today was the last day for classes, well in the morning anyway. Once again I left Jenny in bed and headed in early with water everywhere.

My sessions this morning were “Responding to Motor Sports Incidents” by Andre Biron from Manchester FD in New Hampshire, and “Firefighter Rehab: Best practices for implementing NFPA 1584” by Captain Frank Califano from Roslyn FD in New York. Both provided some valuable information I can use back in Adelaide.

That completed the classroom sessions for this years conference. Jenny had arrived at the Conference Centre so we went in to have a look through the trade show before catching up with Billy and Teri. Billy had organised for a couple of the Chicago Fire cast to come down and do a photo and signing session. It was overwhelming the number of people that turned up for the session with many missing out as there was only a 2 hour window.

The session was to raise some funds for the Firefighters Cancer Support Network with Eamonn Walker (Chief Wallace Boden) and David Eigenberg (Christopher Herrmann) providing their time free of charge for the event. Even though we missed out on a photo with the actors, we did have a good chat with Steve Chikerotis (District Chief Walker). Steve was a District Chief with the Chicago Fire Department and is now the fire department advisor with the Chicago Fire TV show as well as playing District Chief Walker in the series.

After a bit more time looking around the trade show, we headed back to the apartment to freshen up before meeting up with Billy, Teri, Steve, Molly and Mike for dinner at the Marriott. Another good meal but without the shock of a huge check tonight. 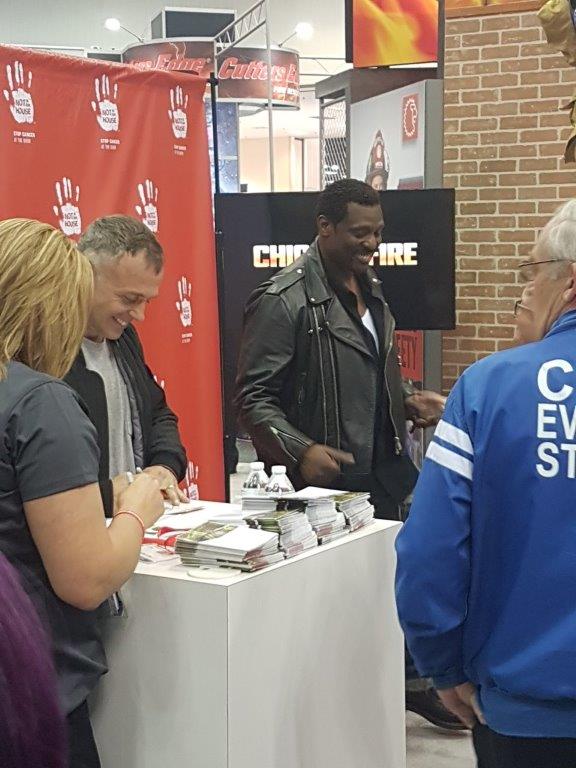