But I don’t need rescuing …

What are you here for? We are here to rescue you!! What, do I look like I need rescuing!

Lets start at the beginning…..

A geocaching trip and event had been planned for weeks to take a couple of US Geocachers – RoadRoach58 from Alabama, on a boat ride to Wright Island which had one lonely cache – GC12E7X Yeah Wright.

Mark had organised a tinny and I had borrowed my brothers SeaDoo. Fast forward to last night and the weather was getting rough and we are talking gale force winds and 3 metre swell. All the stuff that Gilligans Island is famous for :).

After some phone calls and checking radars, satellite loops and any other weather thing we could find, it was decided that we would cancel the tinny but would keep with the SeaDoo for those that want to rough it.

On the way home from night shift, I grabbed a new wetsuit as the old one seems to have shrunk in the wardrobe, then onto home to start up the SeaDoo and hit the road to Victor. An hour later and I still couldn’t get the SeaDoo started.  Mark had arrived and rang to say it was still fairly rough so there was no need to bring the SeaDoo down.

I threw the kayak on the roof on the off chance that conditions would change in the next hour.

Arriving at the meet point and we were greeted with some friendly faces as well as flat seas and sunshine. What a difference an hour makes.

Well the decision was made, the kayak was in the water and I was on the way. There was still a breeze which was coming from behind assisting in a quick passage to the island. The distance to travel was 1 km.

Around 3/4 way, I encountered a couple of large waves and was soon in the water. Oh well, time to paddle the rest of the way like a surfer.

It wasn’t long and I was on the beach on the northern end of the island. Made a phone call to the others back at the boat ramp to say that all was well and I was on the way up to the top to find the geocache.

It was very windy up top with a few rain showers but apart from that it was easy going to GZ. Unfortunately the vegetation was reasonably thick and I was finding the cache a little elusive. Again I rang back to the boat ramp to see if anyone had any clues to where I should look but no luck there.

Another 5 minutes of looking with no luck and the phone rang. Gary said that I had better cut the search short as the rescue boat is waiting on the beach for you.

“No lies, they are down there waiting for you.”

I made the trek down the hill back to the beach to find the Sea Rescue “bogged” on the beach.

“We are here to rescue you!”

“No, but because the Police called us in, we have to rescue you.”

“To me, it looks like you are the ones needing rescue at the moment.”

The tide was going out and the boat looked like it was going to be there a while. In fact they got on the radio to organise another boat to pull them off.

“You won’t need another boat guys. The waves will be here in a minute as they are coming in sets and the boat will float off.”

I am not the local and knew that and sure enough another set came in and the boat was floating again.

So we loaded the kayak onto the boat and I got the limo ride back to the boat ramp. It was a shame as I was looking forward to riding the waves back to shore. 🙁

On arriving back to shore there was a huge welcoming party including Channel 9 News. There must have been a big breaking story around here somewhere. 😉

No chance of not getting photographed around here.

After talking with the local cop, it seems that one of the locals saw me go from being a paddler to a surfer and reported me as drowning and unconscious.

The Sea Rescue guys were good about it and the cop didn’t hang around and even the News cameraman lost interest very quickly. So much for my 15 minutes of fame.

So at the end of the day, I still have to go back to Wright Island to find the geocache.

But I don’t need rescuing …. 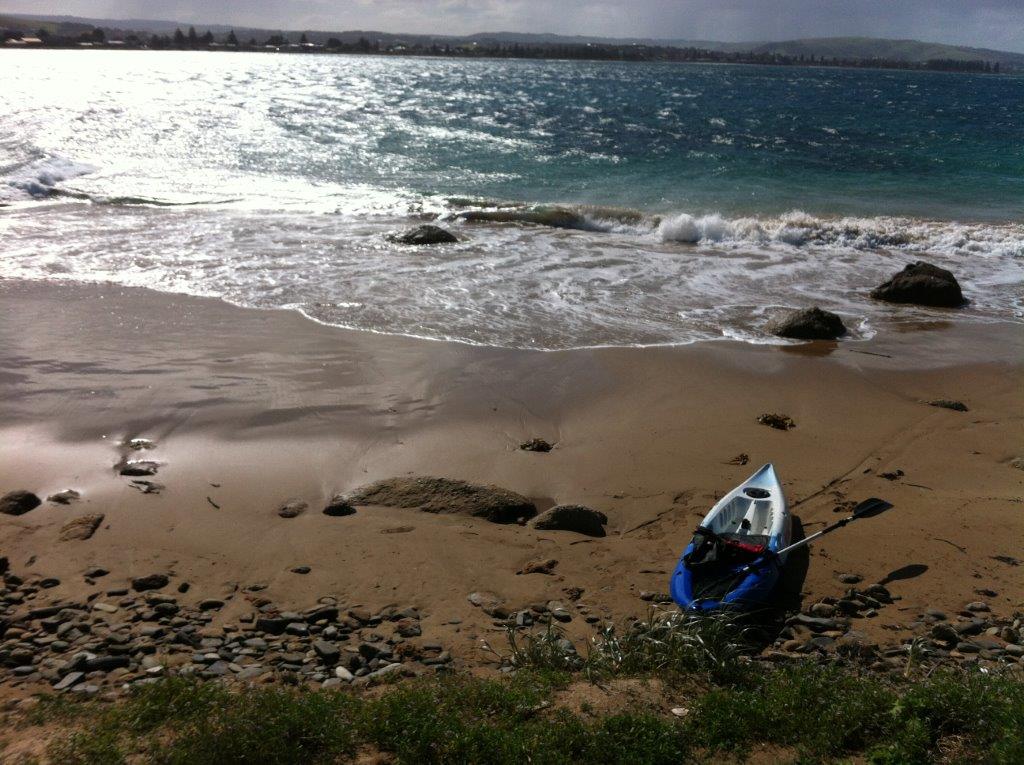 2 Responses to But I don’t need rescuing …