After spending the weekend down in Port Aransas for the Texas Challenge, I headed up to San Antonio to take in some of the local tourist attractions. There are the usual spots such as the Alamo and the Riverwalk which of course I did but the next main attraction after these is Barney Smith’s Toilet Seat Art Museum.

Barney is one interesting guy who in his former life was a plumber and a volunteer firefighter. He is now 91 years young.

Thirty years ago, while Barney was still plumbing, one of his suppliers was throwing out some toilet seats and he grabbed them. Now what to do with them. Why not turn them into art and this is what he did.

What started out as a bit of fun soon became an obsession. He told his wife that he would stop at 500 but when I visited he was at 1060 so I guess there will be no stopping him.

In his time, he has appeared on a number of TV shows like “The Morning Show” and “Today” and he is very passionate about his pastime.

Being an Australian and a geocacher visiting him was very exciting for him and since he is looking after his sick wife, I didn’t want to take up too much of his time but 2 hours later I was still there being shown the seats.

I was privileged to sign a couple of his seats – the Australian one and one of the many Geocaching seats.

He has asked for some material from South Australia for another seat so I had better get a package together. 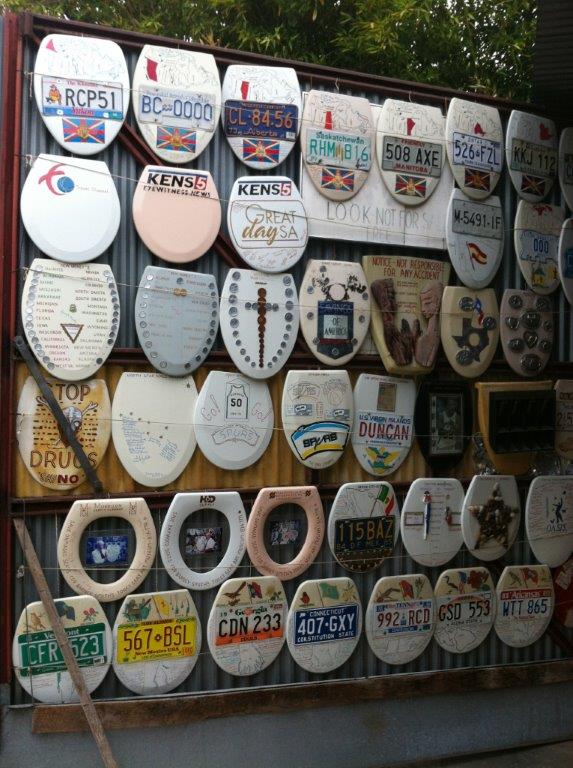