Today is sort of a rest day or at least a rest day from skiing. We have a day trip to the Jigokudani Monkey Park which is home to the Snow Monkeys. Our bus left the Hakuba Base Camp at 815am so it was still an early start to the day. It was then an hour and a half drive to Jigokudani Onsen. Our guide, John, is an expat Californian who has been in Japan for 31 years and in this area for 13 years. He spoke the whole way on the local area, customs and what it is like to live in the area.

One of the many facts we learned was the monuments that seemed to be in every farm plot are actually the family plots for departed relatives in that family. So rather than a central cemetery, they are everywhere. Once a year the families come back to worship their ancestors. Related to that is Japan has an ageing population and much of the farm land actually lays idle as they old folks aren’t capable to farm and the young ones have all left for the big cities.

John moved into the area for a tree change but was soon coaxed into leasing some land to farm with the local oldies teaching him what to do.

If a family line finishes with the death of the occupants, the the local council will take over the property. You can rent these properties from the council for $50 a month and if you can stick it out for 10 years, improving the property and farming the land then the property becomes yours. Apparently there are a lot of vacant houses and land from the death of family lines.

The farms are only very small and this method of agriculture appears very inefficient but I guess it gives the large population jobs if they want them. The area around Nagano is famous for its chestnuts and apples. I tried one of their very large apples and it was both tasty and juicy. Later in the day I tried some chestnut icecream that was also tasty.

We eventually arrived at the Monkey Park. It was then a 2 km walk up a path to the monkey onsen which was compacted snow / ice. I managed to slip over once on the way up and twice on the way down.

The reason that the monkeys have their own onsen was that they used to frequent the Lodge Onsen that was nearby and apparently monkeys and humans don’t mix all that well in the water, so a seperate onsen was built for the monkeys and they were encouraged to visit that one with food. There is still 5 stubborn old moneys that still like the human one.

This clan of monkeys around 200 and don’t seem to be worried by the thousands of visitors every day. It hasn’t always been the case but since feeding the monkeys by visitors has been stopped the bad and aggressive behavior has stopped as well.

When we arrived there were monkeys scattered all over, in the river, on snow banks, on cliffs, in trees but only a few in the onsen which was surrounded by people with all sorts of cameras and lens. One of the highlights was when a monkey was on the edge drinking from the onsen, another came from behind and pushed it in then hid among the legs of the visitors hiding. The wet monkey got out of the water and was looking everywhere for the one that pushed it in.

There was a lot of foraging for food, grooming and just wandering around. We had about an hour at the onsen which went very quickly but still managed over 400 photos. Of course, just as we were about to leave the Rangers started throwing out barley on the snow which perked up all the monkeys. Only got to observe a little of this as it was a 40 minute walk back to the bus on the ice. It was well worth the visit but you need to have more time to observe the monkeys.

It was then into a little village called Obuse for lunch. We were taken to a tourist area not unlike Hahndorf and treated to a traditional Japanese meal. It was a main course of Beef or Fish served with rice, miso soup, salad, dessert and a sample of sake. It was both tasty and filling. We then had a little time to improve the financial aspect of the village at the various little shops. One of the shops, Alexs Country Store, provided free tastings of sake and wine with a plan to selling you something. Bradley and Jenny obliged.

It was then into Nagano to visit the Zenkoji Temple. Even though we have visited a few temples on our trip, the guided tour provided a lot more information than if we had just visited. After checking out the temple for an hour, it was time to head back to Hakuba return just on dusk around 540pm. I would recommend this day trip to anyone in the area.

The hotel shuttle was waiting for us and we had enough time to go inside, grab stuff and back on the shuttle to the Main Street of Echoland to try out another restaurant.

Tonight, we selected Hige Cafe which specialised in food in sticks. Not a lot of English was spoken in here and our group of 12 overwhelmed them a bit. I could only stay for half an hour so grabbed a few sticks and headed to Samarai Kebab for the 3rd time. I had organised a Geocaching Event, “Firesafe goes Skiing” (GC82F4W) and there was actually one other geocacher in town who attended. He is from Germany but now lives and works at a mine in Emerald, Queensland. His caching name is Georode. We chatted for a lot longer than I had anticipated but it was a good event even if it was very small.

After the kilometre walk to the hotel, it was time for a soak in the Onsen again. I had the place to myself at 830pm but I could only last 30 minutes.

Back to skiing tomorrow hopefully, given there is a weather forecast of heavy rain.

Picked up on the walking with 12974 steps today. 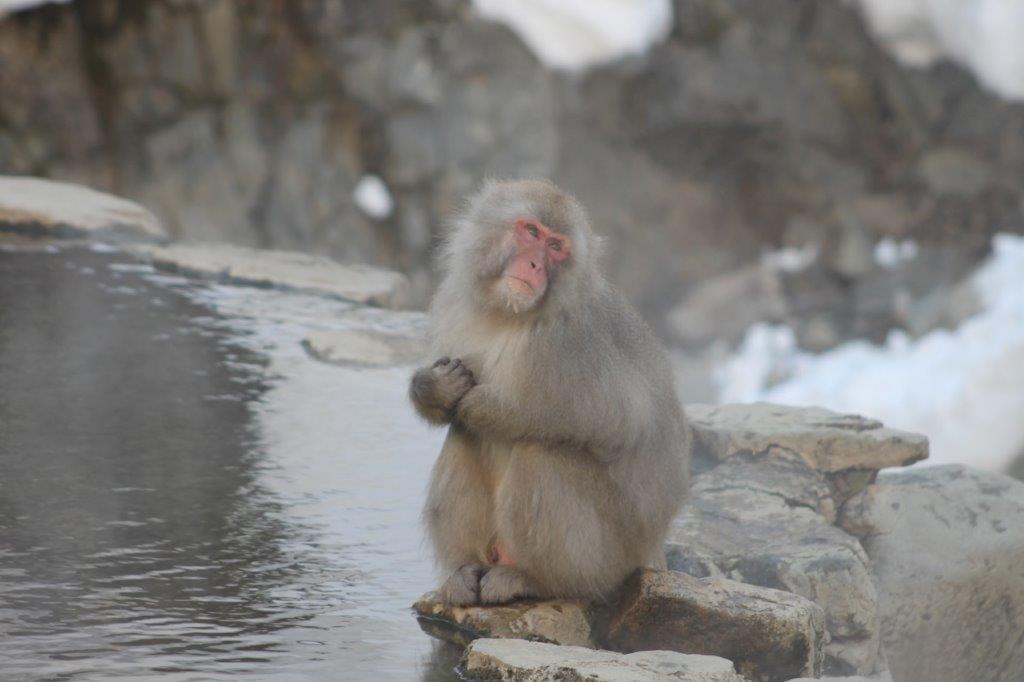